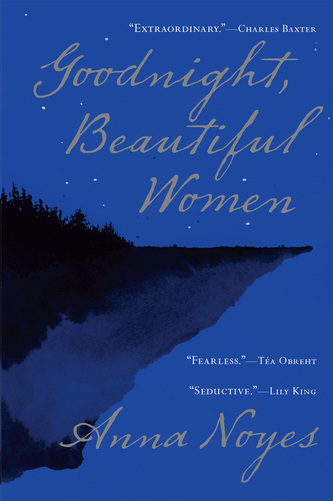 Moving along the Maine Coast and beyond, the interconnected stories bring us into the sultry, mysterious inner lives of New England women and girls as they navigate the dangers and struggles of their outer worlds. With novelistic breadth and a quicksilver emotional intelligence, Noyes explores the ruptures and vicissitudes of growing up and growing old, and shines a light on our most uncomfortable impulses while masterfully charting the depths of our murky desires.

A young wife watches her husband throw one by one their earthly possessions into the local quarry, before vanishing himself; two girls from different social classes find themselves deep in the throes of a punishing affair; a motherless teenager is sexually awakened in the aftermath of a local trauma; and a woman’s guilt from a childhood lie about her intellectually disabled cousin reverberates into her married years.

Dark and brilliant, rhythmic and lucid, Goodnight, Beautiful Women marks the arrival of a fearless and unique new young voice in American fiction.

FIND IT ON GOODREADS

“Lucid, sensual . . . If the fiction of Stephen King and Alice Munro had a literary love child, it might look like this: luminous domestic moments married to a pervasive sense of threat . . . Noyes is a master of disturbing juxtapositions that interpolate childhood games with sexuality, suggesting something dangerous in both . . . appealingly frank and astute . . . Noyes’s prose is admirably restrained, and the real drama remains that of character, the mystery we are to ourselves.” --Washington Post

"Noyes is as sensuous as she is grounded . . . The beauty of her language, with its rhythmic pulls and earthy descriptions are captivating . . . a promising debut from such a young and gifted writer." --Travel + Leisure

“Noyes does not flinch from heavy topics. Her stories are nuanced and unapologetic, revealing the shadow sides of women and girls in all their wild and terrible glory . . . these tender and brutal stories will pierce your core like a hook in the gut, shimmering with raw pain and heartache and the desperate desire to survive. Because despite the darkness in these stories, the women and girls within always discover something about themselves and grow a little bit stronger. They’re sometimes thoroughly lost, maybe irrevocably damaged, and uncertain what to do next, but in Noyes’s talented hands, you’re left with the certainty that these tough and wild and messed-up women are going to figure it out. They’re going to be okay.” --The Rumpus

“A debut as rich and quiet as a walk in the dark . . . Noyes does nothing to romanticize rough-and-tumble girlhood. She plunges into it, floats in its muddiness, and emerges to gaze on it without appraisal, like a hiker meditating on a pond.” --Huffington Post

"The central events of Goodnight, Beautiful Women are often catastrophic or extreme, but the real heart of these stories is Anna Noyes’s achingly rendered murky-blue New England landscape. From a suicide to a failing marriage to a confused sexual awakening, her character’s reactions to trauma are deeply internal yet somehow detached, as if they’re watching a world unfold around them that they can’t quite access. It seems Noyes knows everything about these women, and they’re staged within a dreamlike-turned-nightmarish Northeast with tactile precision." --Kristen Radtke, Electric Literature

“An exemplary debut. [These] are the short stories you use to teach the craft, to exemplify how language can function at its best, its sparsest and sharpest . . . Each of the works is self-contained and a masterpiece in and of itself, but they build—and careful readers will note patterns, resonance. Noyes’ tone shifts subtly between her narratives and narrators—each piece a unique snapshot, and, as a whole, a vivid and captivating triumph. This collection is rich, ripe for rereading.” --Bookreporter
​
"Noyes’ first collection follows women, young and old, grappling with the unmoored moments of their lives...The characters in Noyes’ 11 stories do not shy from their imperfections as they search for those fleeting, ambiguous moments of resolution."--Booklist

"Noyes writes convincingly about the landscape . . . and the working class . . . Though the stories, told from various points of view, contain threats of violence from rapists and molesters, the greatest menace comes from the harm the young female protagonists seem capable of bringing on themselves . . . [Noyes is] a writer who values nuance over tidy endings. These flawed female characters struggle to survive against threats both external and internal in this well-written debut." --Kirkus Reviews

"Goodnight, Beautiful Women reads like an improbable channeling of Flannery O’Connor on the one hand and Elizabeth Strout on the other...Noyes might be staking out a Northeastern Gothic genre.--Down East Magazine

"This collection of stories sheds a dark light on the sexual awakening of women at various stages of life, recalling Miranda July's No One Belongs Here More Than You but without the whimsy . . . Noyes' prose is open and frank." --Book Riot

The haunting, beautifully restrained stories that make up Anna Noyes’s superb debut collection, Goodnight, Beautiful Women, should ideally be read just after twilight, on a porch swing outside an empty house on the coast of Maine while shadows creep their way across the grass in your peripheral vision. A palpable air of menace wafts through the mundane in each of these graceful, sensuous tales of sexual awakening, childhood trauma and quiet heartbreak. --Dan P. Sheehan, LitHub

"If Charles Baxter endorses a short story collection, you know it’s worth checking out. In the case of Anna Noyes, the praise is well-deserved; she writes poignantly about women of all ages and economic backgrounds coming together and drifting apart in New England. The stories are loosely connected, demonstrating how the rippling effects of one event, of one lie, can reach farther than imaginable."--Maddie Crum, Huffington Post "22 Summer 2016 Books You Won’t Want To Miss"

"With terrible grace, these stories bring to light the peril hidden within the mundane, and cast their enthralling shadow on characters that ache like you yourself have ached at your most private moments. Anna Noyes is a revelation." --Alexandra Kleeman

"Noyes' achievement here is nothing less than a high-wire act: precise, fearless, breathtaking. She casts an unwavering gaze on the nature of frailty and desire, offering up gem after gem in this sensuous and startling debut." --Téa Obreht

“Assured and atmospheric, tender and melancholy, these stories of women adrift linger in the mind like music. I love them.” --Karen Thompson Walker

“The thing us, some literature has personality. It shows a human being wrote it, not a machine. It is the one voice, the one soul, the real live touch of a singular hand. That is mastery and it is Anna Noyes.” --Carolyn Chute

"This is an extraordinary book of stories. Many of the characters are anchored to coastal Maine, but a particular quality of wildness animates nearly all of them. The stories are energetic, often mysterious, and beautifully written, and they will stay in your memory long after you finish the book." --Charles Baxter

“Anna Noyes has the gift. Her sentences sing with a gentle perfection, almost as if to themselves, and her characters seem to enter the page cradling years of experience inside them. It is a joy—and the sweetest kind of heartache—to watch her making her swift way story by story to their hearts.” --Kevin Brockmeier

"I read Goodnight, Beautiful Women in one ravenous sitting. Every one of these stories has a moment of subtle, delicious heartbreak (sometimes driving the story, sometimes in the periphery). With exceptional delicacy and grace, Noyes cracks opens the most ordinary moments and offers us their painful core. Often I found myself baffled that such simple details (a child's fingers beneath a door, the ache of a missing tooth during first sex, the smell of a banished stepfather's jacket) can contain so much. And yet she doesn't posture or try too hard. She simply has an instinct for what might be remembered later, when the importance of an event finally reveals itself. Noyes's prose is precise, skillful, and full of raw emotion. It's some of the most elegant writing I've come across recently." --Dina Nayeri

“A mesmerizing collection of stories by one of America's most exciting young writers, Goodnight, Beautiful Women moves us along and around the coast of Maine and into the intimate lives of its inhabitants. These pages are full of moments that are wrenching, funny, and lit by a deeply sensuous attention to the small betrayals and sacrifices our dreams leave in their wake. Tender yet unsentimental, unflinchingly bold but full of beauty, Anna Noyes’ debut collection lingers in the mind well beyond its final paragraph. A book to fall in love with.” --Jonathan Lee

“In stories both hypnotic and precise, Goodnight, Beautiful Women immerses us in a Maine unseen by ‘summer people’—an uneasily beautiful place of cloistered towns where ‘you can’t keep anything to yourself.’These stories shine with prismatic, perfectly rendered settings, but more brilliant still is the delicacy with which Noyes unspools the inner lives of her characters. Here are young women haunted by long-ago lies and shameful betrayals, whose pasts are kept achingly close to the surface by hometowns that will neither forget nor forgive. This feels like no debut at all, but a voice fully formed.” --Casey Walker

"Anna Noyes’s debut story collection doesn’t need the lushest language to create the lushest experience, not when each paragraph has that one sentence with an image you might never shake. The scenes conjured, of young women on the brink of pivotal decisions made by and for them, are frequently upsetting, but the clear light she shines on these moments gives them foretold nostalgia. There’s no turning back for her characters, but that always means there’s so much future left for them. Noyes’s own future should be very bright if she can continue to tell stories this assured and impactful." --Jonathan Woollen, Politics & Prose

"Eleven taut stories, many with ambiguous endings, show the lives and dreams, the hopes and failures, of these women (and girls) of coastal Maine. They are 'year round' people, whose lives are often impacted by the 'summer people' who interact with them only sporadically. Anna Noyes's writing is beautiful, insightful; something to savor and re-read." --Dawn Rennert, Concord Bookshop

Anna Noyes illuminates the inner lives of women in this debut collection of interconnected stories. The backdrop is the wistful cliffs and shores of coastal Maine and New England. Noyes’ writing is wonderfully lucid as she explores the anguish, uncertainty, and pain of her characters -­ they feel real -­­ and how their actions during very trying times lead to transformation. A highly recommended book from a promising new writer. --Booklink Booksellers

​“These interconnected stories set in Maine and around the Northeast coast announce a startling new writer of strong literary fiction. Noyes’ women yearn, stumble, get back up, make terrible mistakes, strive, keep dark secrets, take off, come back again, and fumble toward love. An extraordinarily raw voice that will remind readers of Rebecca Lee and Elizabeth Strout.” --Melanie Fleischman, Arcadia Books